“Another Tremendous Year” for Clean Energy Legislation in the Northeast

Earlier this month, we held our signature policy event of the year: NECEC’s Annual Legislative Roundup. Our state coordinators from across New England traveled to Boston for an engaging discussion of the 2017 state legislative sessions. Denterlein CEO Geri Denterlein, whose public relations firm sponsored the event, welcomed more than 90 business leaders with remarks about her passion for working on exciting topics like energy.

Murtha Cullina Government Affairs Consultant Mike Martone kicked off the state reviews with the latest developments from Connecticut, which saw most of its legislative session focus on “The Millstone Bill” that would have allowed  up to 50 percent of the Millstone nuclear power plant output to be sold directly to utilities. While that bill didn’t pass, it garnered the attention of much of the energy community this year. With the Legislature still working on a budget in Connecticut, Martone noted that funding for the Regional Greenhouse Gas Initiative and the Connecticut Greenbank could face raids during that process. Connecticut also released the long-awaited Comprehensive Energy Strategy, a three-year road map that will guide the Nutmeg State’s energy future. NECEC will be participating in technical sessions on a variety of issues in the CES, including a provision increasing the Renewable Portfolio Standard (RPS) to achieve 30% Class I renewables by 2030.

NECEC Government Relations Executive Dan Bosley reviewed both Maine and Massachusetts’ legislative sessions.  Maine highlights included the successful overturning of Governor LePage’s veto on LD 1147, which will continue current RPS levels through 2028.  Unfortunately, his veto of the solar net metering bill LD 1062 was sustained just the night before the event.

In Massachusetts, approximately 100 energy related bills have been filed. While there was little action taken on any this year (the first year of a two-year session), several important bills such as those to increase the RPS and to raise the net metering caps will be heard in committee hearings this fall. As the legislature drives towards the second year of its session, bills on energy storage, electric vehicles, energy efficiency, and grid modernization will also be considered.

NHSEA Executive Director Kate Epsen provided a comprehensive overview of New Hampshire, the state with perhaps the most consistently positive legislatives outcomes of 2017. Epsen suggested that the year started out “pretty grim,” but the passing of a handful of impactful bills quickly turned the tide. One such piece of legislation included Senate Bill 129, which will increase Class II solar in the RPS and allocate 15% of the Renewable Energy Fund to benefit low to moderate income ratepayers. Conversely, House Bill 225 sought to repeal the RPS. The bill was successfully amended to remove all repal language and now soley dictates Renewable Energy Credit transaction reporting to the Public Utilities Commission. Epsen also revealed that a drum beat to lower energy costs continues to persists throughout the New Hampshire Legislature.

NECEC Policy Analyst, Jamie Dickerson examined another successful year for clean energy in Rhode Island. Perhaps the Ocean State’s most positive outcome came in the extension of the Renewable Energy Growth (REG) program, NECEC’s top legislative priority in Rhode Island for 2017. The program will now run through 2029 at 40MW/year. Last week, Dickerson attended Governor Raimondo’s REG extension bill signing. Other highlights from Rhode Island include the expansion of virtual net metering to educational institutions, hospitals, and nonprofits and the establishment of a streamlined, statewide municipal solar permit. This new permit will take effect on January 1, 2018. While truly “another tremendous year,” Dickerson noted that the lone sore sport was a late-breaking $12.5 million raid on energy efficiency funds in the 2018 budget. However, the budget did retain Governor Raimondo’s proposal to establish an electric vehicle rebate program. 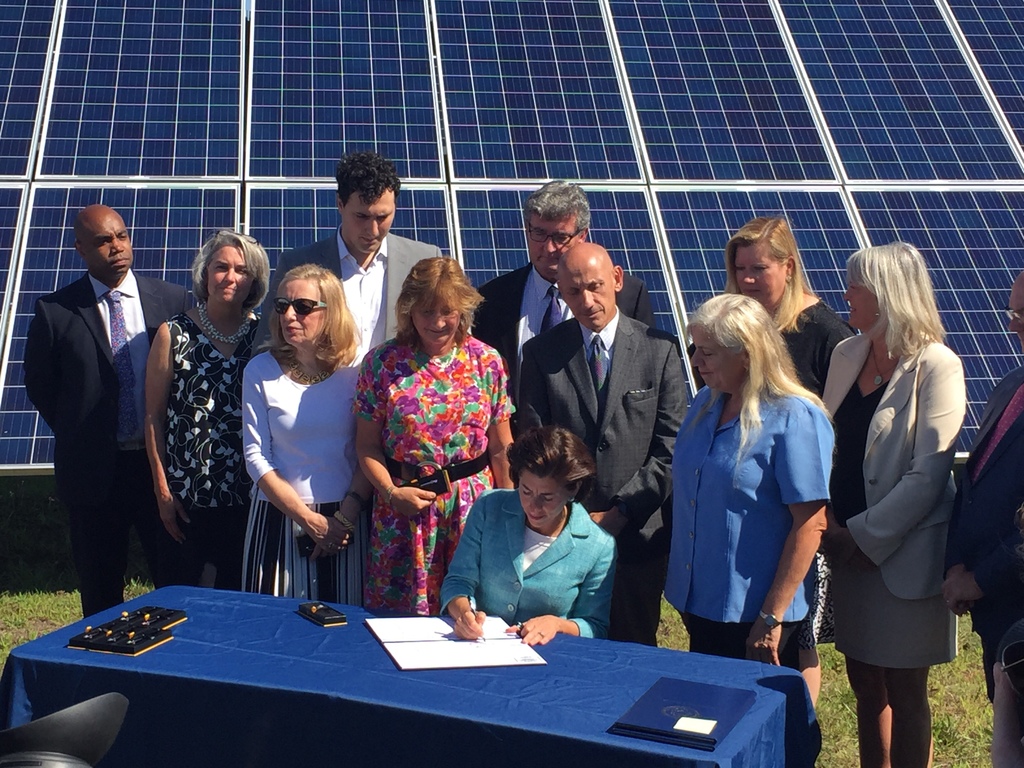 Finally, REV Executive Director Olivia Campbell Andersen closed out the state reviews with a look at Vermont. The 2017 session laid the groundwork for expansion of energy storage, with Senate Bill 52 mandating a study on storage, as well as a study on Public Utility Commission transparency. Additionally, the Net Metering 2.0 process successfully maintained net metering in the Green Mountain State with some rule improvements. Unfortunately, existing net metering customers were dealt a blow by a last minute amendment to House Bill 42. The amendment allows the Public Service Board to apply the same rules governing new net metering system bill credits to pre-existing customer’s interconnection after ten years.

For more information on each state, download the presentation slides. And stay tuned to the NECEC Blog and @NECEC on Twitter for the latest policy news as we wrap up the year and prepare for the 2018 legislative sessions.

The Inflation Reduction Act: A Boon for Clean Energy